The Order of the Blessed Virgin Mary of Mount Carmel began as an association of hermits who came together “by the spring of Elijah” on Mount Carmel in the Holy Land during the period of the Crusades. By the early part of the thirteenth century this group had become sufficiently established to ask the Patriarch of Jerusalem, Albert of Avogrado, for a Rule that would govern their life in common. This Rule, the Rule of Saint Albert, forms the basis for the way of life that all Carmelites share today. Its chief characteristic consists in an orientation towards a life of prayer and contemplation in solitude, faithful to the eremitic vocation from which it sprang.

With the fall of the Crusader Kingdoms the first Carmelites were forced to leave the Holy Land to settle anew in Europe. As a consequence of this migration their way of life necessarily underwent some modification. Classed as “friars”, they began to live in more structured communities and undertake sacramental and preaching ministries. Nevertheless, the eremitic spirit continued to play a vital role, supported by a strong commitment to poverty and frugality of life.

Originally a purely masculine Order, the Carmelites first attracted female adherents among the Béguines: groups of pious laywomen who, particularly in the Low Countries, often came together to form communities dedicated to good works and prayer. Some of these would later seek a closer affiliation to Carmel by adopting its Rule and setting up convents where enclosure was observed and religious vows were taken. One such community was the Convent of the Incarnation at Avila in Spain where, in 1536 Teresa de Cepeda y Ahumada became a nun. 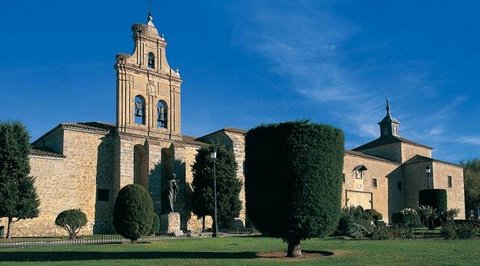 Saint Teresa of Avila (as she would afterwards come to be known) was instrumental in promoting the reform of Carmelite life by returning it to its eremitic origins, emphasising its commitment to poverty and simplicity of life and, above all, its focus on contemplation and prayer. The foundress of over fifteen monasteries for nuns dedicated to these aims, her work continued to spread after her death and Teresian (or ‘Discalced’) Carmelite monasteries are now to be found all over the world.

A great mystic, Saint Teresa stands out in the Church above all as a spiritual guide and teacher. In this she is accompanied by her contemporary among the Carmelite friars, Saint John of the Cross. Together, through their charisma and writings, these two saints articulated the spirituality with which the Carmelite Order continues to be associated today.

In the course of its long history Carmel has given rise to a number of other important saints: men and women who, by allowing themselves to be formed by the distinctively Carmelite balance of prayer, solitude and community life, have been able to add something new, in their turn, to its heritage of spiritual teaching. In modern times, the Carmelite who has undoubtedly had the greatest influence in this respect is Saint Thérèse of Lisieux. Her discovery of a “little way” of confidence and love, as described in her autobiography, has made her not only one of the most popular saints today but has exercised a hidden influence over all subsequent spiritual doctrine.

Blessed Elizabeth of the Trinity, a near contemporary of Saint Thérèse, is another Carmelite saint who has contributed to our spiritual heritage. From an early age she became aware of the reality of God’s living presence within her and, in her many letters from Carmel to friends and relatives, she drew attention to the New Testament foundations of this truth, encouraging everyone she knew to remain peacefully attentive to this presence in the situations of their daily lives. “Let yourself be loved,” she insisted.

Saint Teresia Benedicta of the Cross [Edith Stein] was a remarkable woman who, after a long and difficult interior struggle, converted to Christianity from Judaism. A philosopher by profession, she became a Carmelite after reading and being influenced by Saint Teresa of Avila’s Life. As a Carmelite she not only applied her great intellectual gifts to the study of Carmelite spirituality but personally gave witness to a life of deep prayer and self-surrender. The outbreak of the Second World War put her at personal risk because of her Jewish origins and she died in Auschwitz, a witness to her faith and on behalf of her people. In all these respects she has become an icon of sanctity amidst the difficulties and demands of the modern world. She was made a patron of Europe by Pope John Paul II.