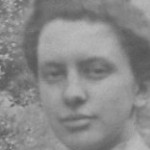 Margaret Agnes Rope (1882-1953), a Sister of our community, was a stained glass artist of considerable skill and artistic talent whose works are to be found in a number of churches and places of worship both in Britain and abroad. After a long period of neglect, her work has aroused critical interest and appreciation in recent years and she is generally considered to be amongst the finest women stained glass artists of her generation. A major exhibition of her work, attracting both critical and popular interest, was held in her home town of Shrewsbury in 2016.

Margaret studied art at the Birmingham Municipal School of Art, the centre of the Arts and Crafts movement, at the beginning of the twentieth century. There she took up stained glass manufacture and painting under Henry Payne (1868-1940), one of the last great exponents of the Arts and Crafts movement. During her time at the Birmingham School Margaret won a number of prizes and scholarships and, on leaving it in 1909, she took up stained glass work professionally, working first from her home and then at the Glass House in Fulham, London. It was during this period that she undertook a commission to design a series of windows for Shrewsbury Cathedral, including the Great West Window, considered by many to be her finest work. 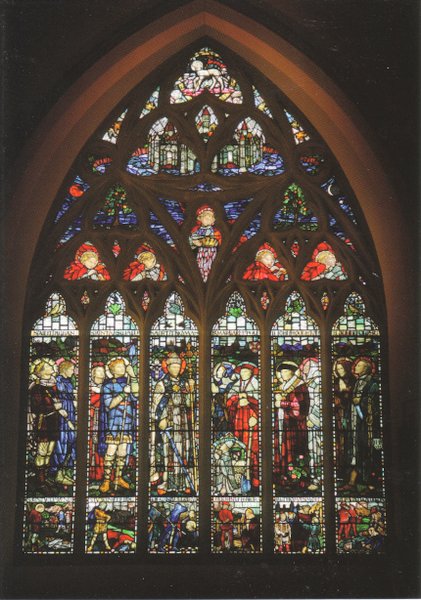 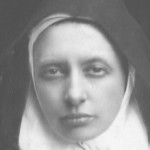 Margaret had become a Catholic at the age of fourteen, following in the footsteps of her mother, who had converted to Catholicism shortly after her first husband’s death. In 1923 Margaret entered the Carmelite Monastery at Woodbridge in Suffolk. There, following a Carmelite custom of the time, she was given the title Sister Margaret of the Mother of God.
After completing her canonical novitiate, Sister Margaret was encouraged to continue with her stained glass work by the Prioress, Mother Rosario of Christ, who provided her with the facilities she needed to make this possible. The Woodbridge community was thriving but materially poor and for much of this period, until World War II intervened, Sister Margaret’s work was virtually supporting it at the financial level. A series of four windows completed specifically for the Woodbridge community and subsequently transferred to Quidenham, demonstrate the stylistic features that give Sister Margaret’s work its particular strength and artistic interest. They were designed as a set of companion pieces to illustrate the Carmelite foundations from which the Woodbridge monastery had descended (Avila [Spain], Paris [France], Notting Hill [London], Woodbridge [Sussex]) and are noteworthy for their masterly use of colour, strongly delineated figures and intelligent, well-researched use of symbols.

By 1938 a combination of factors – the increasing numbers of Sisters, the cramped nature of their property and the growth of the town in their vicinity – prompted the community to move from Woodbridge to Rushmere St. Andrew, near Ipswich, where it remained for the following ten years. However, the nuns then discovered that the land around their new home was about to be used for property development so the Prioress at that time, Mother Mary of Christ (1897-1969), once again initiated a search for a house that would be even further out in the country where the community would be able to benefit from greater opportunities for expansion and would have sufficient grounds to ensure their privacy. After much searching she found Quidenham Hall, the family home of the Earls of Albermarle, which had recently been put up for sale. A slump in the property market following World War II together with generous donations from well-wishers enabled her to buy it and the community moved there in 1948. 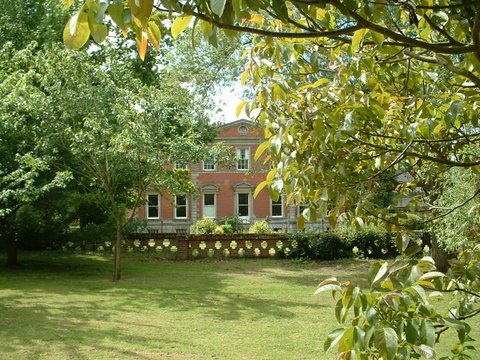 Construction of a church and Choir for the new monastery at Quidenham had to wait until sufficient funds could be raised and planning permissions granted. But by the early 1950s the community was in a position to make preparations. It was decided that the main body of the church would occupy the site of the Servants Hall attached to the Albermarle’s former home. The Servants Hall concerned was of considerable age and historical interest since it had been adapted from a much earlier dwelling. Much care was therefore taken to preserve its main features and incorporate them into the new structure. Amongst these it was proposed that some pre-existing windows would be adapted and filled with stained glass by Sister Margaret. By then, however, her health was declining and she no longer felt equal to the task. Indeed, although a workshop had been specially built for her use, it was noticed by many of the Sisters that no new stained glass works of any significance were appearing. For this reason it was decided that, while Sister Margaret would create the designs for the windows of the new church, the actual labour would be carried out by her cousin “Tor” (likewise named Margaret Rope) who was herself a stained glass artist of note.

The windows in question cover two main themes down the two sides of the church nave. On the west side there is a series comprising Saint Joseph and English saints and martyrs. On the east, the biblical figure of Elijah (legendary founder of the Carmelite Order) and Carmelite saints and martyrs. In addition to these there is a sequence of roundel windows around the walls of the side aisles, four of which summarize the main events in the life of the Virgin Mary: the Visitation, the Purification, Saint Mary at the Cross, and the Coronation of the Virgin. Altogether they form one of the outstanding features of the monastery church today and although Sister Margaret herself did not live to see the work completed, they are nevertheless a testimonial not only to her exceptional gifts but to the devotion that inspired everything she created.

A series of windows along the upper register of the nave on the east side of the church depict the Prophet Elijah with Carmelite saints and martyrs: 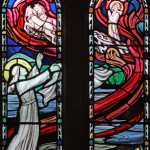 Elijah was claimed early on in Carmelite history as symbolic “founder” of the Order. One reason for this was his historical link with the geographical site of Mount Carmel where the first Carmelite hermits established themselves “beside the spring of Elijah”. But on the spiritual level these early hermits also identified themselves particularly with Elijah’s prophetic spirit and passionate defence of “the God of Israel before whom I stand”. His ardent cry: “I am filled with jealous zeal for the Lord, the God of Hosts” (1Kings 19,10) was adopted as the Carmelite motto. The incident depicted here shows him being seized up to heaven in a whirlwind, transported in a fiery chariot (cf. 2Kings 2,11), which was interpreted in Carmelite spiritual tradition as a visual metaphor for the transcendent nature of uncompromising love for God. The scene has been recreated over both panels of the window allowing the artist full scope to emphasise the swirling trajectory of the chariot as it soars upwards.

Saints Teresa of Avila and John of the Cross stand side by side in the second window along this row. The names of both are linked as co-founders of the Reformed (or ‘Discalced’) Order of Carmel and as major writers on mystical prayer. Saint Teresa is shown here with a quill pen. Above her, the Holy Spirit pours down the grace of inspiration, while beside her an angel stands with the flaming spear of divine love in his hand. John of the Cross is depicted with the crucifix from which he takes his name. He, too, is being instructed by the dove on his right shoulder, symbolising the Holy Spirit.

Saint Simon Stock, shown on the left of the third window, was an Englishman who became Prior General of the Carmelite Order in about 1256. He is said to have had a vision of the Virgin Mary in which she handed him a brown scapular (a yoke-like garment that forms part of the religious habit) and this gave rise to the popular ‘scapular devotion’, still followed by many lay people today, whereby a miniature scapular is worn beneath the clothing as a sign of one’s dedication to the service of Christ. This is the scene shown here. To the right of Saint Simon stands Saint Therese of Lisieux. She carries an armful of roses and is throwing some to the ground. This was a characteristic gesture of hers; she used to stand in front of the cloister crucifix of the Lisieux Carmel throwing rose petals at the representation of Jesus hanging there an an act of love and adoration. At the end of her life Saint Therese referred to the posthumous mission she foresaw for herself from heaven: “You will see… it will be a shower of roses.” Many people today claim to have seen this prophecy fulfilled in answers to prayer received at Saint Therese’ intercession.

The final window in this series depicts the Carmelite martyrs of Compiegne in France. They were guillotined for their faith during the French Revolution and went to the scaffold as a community, encouraging each other and singing the Salve Regina together until, one by one their voices were quenched. It is said that the populace as a whole were so disgusted by this brutal and senseless act that it effectively brought an end to the wave of executions sweeping through France at that time. The story of the Carmelite nuns of Compiegne was dramatised by Georges Bernanos and made the subject of an opera by Poulenc.

The series of windows on the West side of the nave begins with Saint Joseph under the title ‘Saint Joseph the Worker’, an allusion to his trade as a carpenter. Beside him stand working men and women of all kinds whose work is allied together with his in constructing the City of God. An inscription beside his head says: “I will always be their protector.” Saint Teresa had a great devotion to Saint Joseph and placed several of her foundations under his protection.

Saint Edmund and Saint Thomas Becket are depicted together in the next window. Edmund is a local saint. He was king of the East Angles from 855, a christian who, when killed in battle by the Danes in 870, died with the name of Jesus on his lips. He is shown here wearing the crown of kingship and carrying the arrows that killed him in one hand, the palm of martyrdom in the other. Saint Thomas Becket was one of the most venerated English saints of the Middle Ages and his shrine at Canterbury was an important focus of pilgrimage. Here he wears the vestments of an Archbishop; behind his head, are portrayed the massive stone towers of Canterbury cathedral.

Saints Thomas More and John Fisher stand together in the third window. Both were martyred under King Henry VIII for upholding the cause of Queen Katherine, whom Henry wished to divorce, and refusing to take the Oath of Supremacy whereby Henry would make himself the effective head of the Church in England. More wears his Chancellor’s chain of office and holds a simple cross in his hand; Fisher is wearing the robes of a Cardinal and holding a representation of Cambridge University of which he was both chancellor and re-founder.

The last window is dedicated to the group of saints known collectively as ‘The Martyrs of England and Wales’. These were British Catholics executed under the treason laws of 1534-1680 for practising their faith. Several representative groups are shown here, including members of a band of heroic Jesuit priests who exercised a clandestine ministry among English Catholic families at that time and who were either betrayed or hunted down in the exercise of their priesthood – amongst them, Edmund Campion and Robert Southwell.